A life coach identified as Ajero Morgan on Twitter has gotten people talking on social media after sharing a piece of his mind.

Morgan stated that people who have brothers that are still generous after they have gotten married should not get comfortable with thanking their kin alone.

He noted that the wives of such family members should be heartily thanked and appreciated.

Audio: Listen to this beautiful track (Kayode – Pemi Lori Ago)

This, according to Morgan, is because men who respect their wives often listen to them. As such, behind the benevolence of such men is the strong support of their wives.

“If after marriage, your brother is still being generous toward your family, don’t always thank him alone. thank & appreciate his wife also. Men who respect their wives listen to them. So, behind your brother’s benevolence is the support of his wife. Don’t take it for granted,” his tweet read.

See his tweets below: 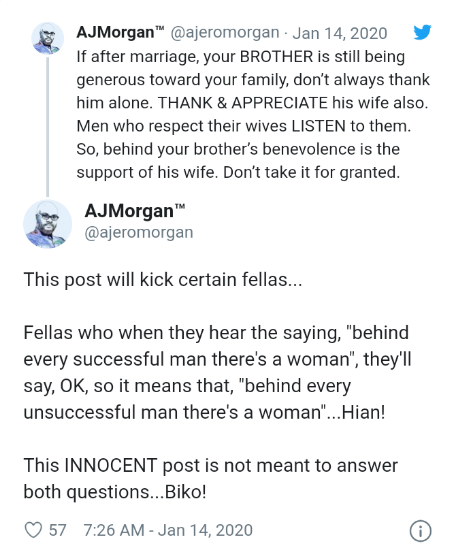 My life as stripper –Jean Great Natasha – The Sun Nigeria

There Are Plots To Attack The Senate – Lawan